Charity law requires those charities with a gross income of more than £25,000 to have some form of external scrutiny of their accounts.

The role of the independent examiner is to provide an independent scrutiny of the accounts. The examiner plays a part in maintaining public trust and confidence in charities

This limited form of check (sometimes referred to as ‘negative assurance’) contrasts with an audit. The examiner is only required to confirm whether any material matters of concern have come to their attention, whilst an auditor is required to provide an opinion on whether a charity’s accounts give a ‘true and fair view’.

An auditor builds up a body of evidence to support a positive statement as to whether the accounts give a ‘true and fair view’. An audit is carried out in accordance with international auditing standards and the audit guidance issued by the Financial Reporting Council.

An Independent Examination is therefore a limited form of scrutiny compared to an audit. It provides less assurance in terms of the depth of work which is to be carried out and is limited as to the matters on which the examiner reports.

If your registered charity’s financial year ended on 31 March 2018, then the deadline for submitting the charity’s accounts/ annual return to the Charity Commissionis 31 January 2019.

The Charity Commission has produced guidance on how to prepare an annual return. You can find that here 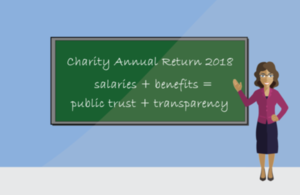 For the annual return 2018/2019, you need to be aware that there will be new questions to answer.  You can find more information about that here

If you need any further advice, then you can contact our office  here

You can also claim if you employ a care or support worker.

If you have more than one employer PAYE reference, you can only claim Employment Allowance against one of them.

If you’re part of a group, only one company or charity in the group can claim the allowance.

You can’t claim if: